‘In the name of God, the Clement and Merciful! To the most noble and distinguished sheikh, the virtuous and honored Pace, Pisan; May it please God to preserve his honor, to decree his salvation, and to help and to assist him in the performance of what is good! Hilal ibn Khalifat al-Jamunsi, your affectionate, well-wishing friend, to him who follows a good path [sends] greetings and the mercy and blessings of God.’

The quote above was written by a Tunisian merchant in 1201 and was send to Pace, a merchant from Pisa. Does his letter reveal anything about good or bad relationships between Christian and Muslim merchants? 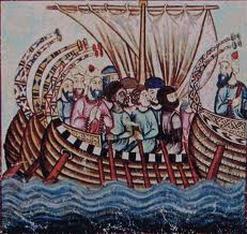 Some historians portrayed (Latin) Christian Europe as a religiously unified society, locked in conflict with the Jewish minority inside its borders and the Muslim world beyond its borders. A second (contrasting) model has a more positive view. By stressing the amount and variety of trade among Christians, Muslims, and Jews, it portrays medieval Christendom as open to peaceful contact with other religions. The third model, influential since the period of European colonization in the nineteenth century, avoids both the first model on religious unity and the second model about peaceful contact. It emphasizes the competition among the Christian powers of medieval Europe to dominate non-Christian lands (Lower, 504). But which of these models is right?

These models are leading to the purpose of my research.  The purpose of my essay is to examine whether the trade between these two worlds in the Mediterranean was stimulated or was made almost impossible. I also want to investigate if the relations between Muslim and Christian merchants were good or bad. Did they fight each other or were they good ‘colleagues’ of each other. I will investigate the period between the 10th and the 13th century AD.

Primary sources about this subject: 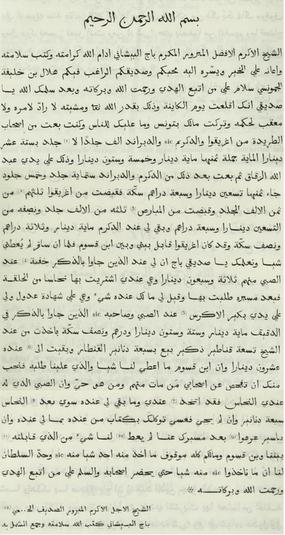 I will use for my research topic two primary sources. They are both letters written by Muslim merchants and were written in 1201 to their Christian colleagues in Pisa, Italy. Both letters were written in Tunis, northern Africa. By the eleventh century, the city of Tunis had become a commercial center of the first rank. This was because of the city’s position near the strait of Messina. Tunis attracted  a lot of merchants from Pisa, Genoa, and Venice, who were soon followed by Iberians, especially Catalans. Both sources tell us about an ‘incident’ that has caused a sudden breakdown in the relations between Pisa and the Almohad government of Tunis.

According to Robert S. Lopez (see references below) the incident had been provoked by the Pisans, who committed an act of piracy in the waters of Tunis. The Pisa merchants were forced to flee the city and left their property and debts behind. By sending these letters, their Muslim colleagues kept the Pisans up to date. The letters contain political news, reports of unfinished business and of course some claims that a few Pisan merchants still owed them money. These letters also revealed that there was a close relationship between Christian and Muslim merchants. They worked well together and both groups also participated in illegal activities, for example the smuggle of iron

After some research it became clear that most Christian and Islamic merchants were able to get along with each other. The merchants of both worlds weren’t interested in war with ‘the infidels’, because wars ruined the trading network of the Mediterranean Sea. They didn’t care about each other’s religion, they did care about profit. Worldly and religious leaders had very different opinions about the interaction between the Christian and the Muslim world. There existed many (religious) laws that hindered the trade between these two worlds. Wars between kingdoms and organized piracy hindered the Mediterranean trading network. But there’re also examples of stimulating the trade between the two worlds. In most cities for example, foreign merchants where allowed to settle in special quarters (funduqs/fundaco).