The Milliarium Aureum at the center of the Roman road network

Any trip to Rome should include a visit to the Forum Romanum, the centre of the antique city. On it, you can find the remains of the Milliarium Aureum, or ‘Golden Milestone’ that was erected there in 20 BC by the first emperor of the Roman empire, Augustus. The Milestone indicated the central spot of the Roman road network, which was mainly built from the fourth century BC onwards. The roads proved to be of major importance to the city and its ever growing hinterland, for economic, military and political reasons. 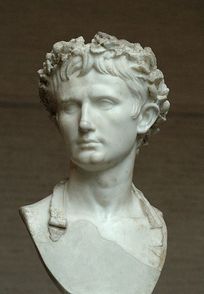 Augustus. Source: Wikimedia Commons
According to its foundation myth, Rome’s origins can be traced back to 753 BC when the brothers Romulus and Remus created the first settlement on a spot close to the Tiber river. In the centuries following this event the settlement grew to be a city of major importance, first in the Latium vicinity, then onwards to the entire Italian peninsula and eventually spreading its influence across the entire Mediterranean World. Road building was on the Romans minds early on. During its growth the city created colonies, which were connected to the home city by the, for its time, rather extensive road system. As road building and maintaining grew more and more important to the Roman republic, it was a topic of interest for the elite to be deeply involved in as well. For instance, the office of curator viarum, a person to oversee the quality of the roads, was created. In republican times this was already considered an important office and oftentimes regarded as a starting point for a promising political career. This office would then continue to exist in the imperial era, with the emperor himself in that very position.

Rome in the road network

Augustus thus wasn’t just the first emperor, but also the first curator viarum in imperial times of the Rome vicinity. In this role, he made a showcase of restoring some of the major and historical roads. This was in a way unifying Italy in the geographical reality, creating a sense of tota Italia, with the entire peninsula as an ‘extension’ of Rome. These
roads, apart from their practical use thus also became a sign of real, visible and physical Roman power. The intensified road network helped to create a certain uniformity on the peninsula, with Rome becoming more and more the place of centrality. The ‘Romanisation’ of Italy became present in the landscape as much as it was in the minds of the inhabitants. As time progressed the influence of Rome would then grow far beyond the borders of Italia,
eventually surrounding the entire Mediterranean Sea. If we consider the Roman road system in a network we can
however discover a decentralized network. With a slight supplement to the original saying however, we could say that all roads eventually led to Rome, as it was of course the major city in the republican and early imperial times. 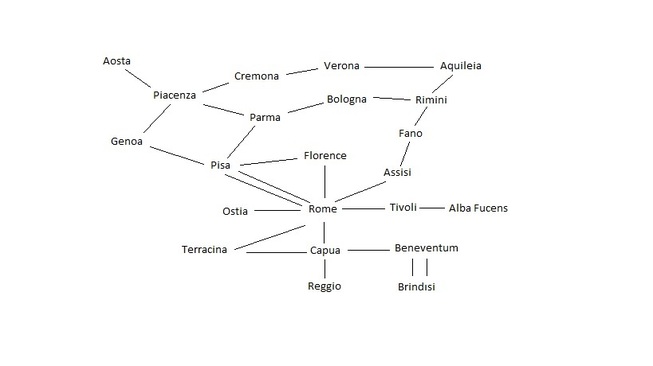 A schematic of the major roads of Italy, 2nd century AD. 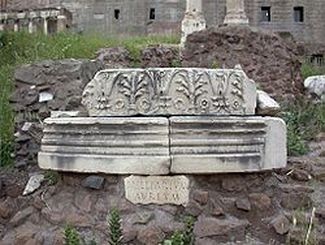 Remains of the Milliarium Aureum. Source: Wikipedia.org
Building roads is one thing, how to get around on them yet another. Mapmaking wasn’t a familiar concept in antiquity, and the Romans used itineraries on their journeys. These were a list of places and distances on a given route. The traveller then could make use of milestones along the way to get a better idea of where he or she was. The information presented by the milestones oftentimes included the nearest city, but also the name of the emperor at that time, and the persons responsible for repair and maintenance of that particular road. This again shows the political importance of the roads and the necessity to claim public responsibility and praise for its creation and upkeep. A very particular Milestone was the ‘Golden Milestone’, or Milliarium Aureum. It appeared to have indicated the distances between the gates of Rome and several major cities in the Empire. However, the Milliarium Aureum has unfortunately only survived in part, so it is unclear to this day what its exact contents were. Some sources from the first centuries AD have survived but their description of the Milliarium Aureum is very short and limited. Most telling perhaps is Plutarch’s Life of Galba that describes the pillar as the place “at which all the several roads through Italy terminate”, hereby indicating the centrality of the place. Combined with the fact it was Augustus who in his position of curator viarum erected the Golden Milestone we can get a just a glimpse of its importance, but unfortunately not much more than that.