Concepts such as Social Network Analysis, spatial mapping, and connectivity offer stimulating new resources for the academic analysis of political, economic, and cultural contacts in historical contexts. The great diversity of populations, traditions and religions around the pre-modern Mediterranean provides a multi-faceted laboratory for the application of these new theories. How did networks of cities, ports, religious centers, colonies, diaspora-communities, diplomats, Grand Tour travellers, or letter-writers contribute to the construction of Mediterranean communities and worlds? What role did the sea itself play in the rise and maintenance of these networks? How and by what means can we best map these blue networks? 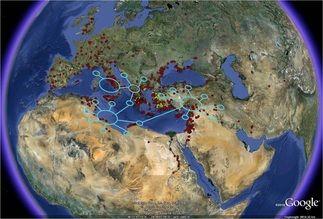 This website was created in 2013 by third-year students from the University of Groningen in the Netherlands, in fulfillment of the requirements for the course 'Blue Networks. Social Networking in the pre-modern Mediterranean World', the last segment of the three-year minor The Mediterranean World, offered by the History department of the Faculty of Arts.
The course began with four plenary sessions in which network theory was discussed in relation to Antiquity, the Middle Ages, and the Early Modern periods. After this, in-depth seminars gave students the opportunity to examine network dynamics in more detail in the respective periods, using a common theme.

The following seminars were offered:
In these seminars students first applied network theory to interpret various primary sources, ultimating leading to their own research projects, resulting in an academic essay as well as a web-page for a broader audience, which you will find here. This website presents the results, showing the wide range of ways in which network theory can be applied to the Mediterranean world in the pre-modern period.