Header: orange and grey areas show the spread of Muslim domination in the Mediterranean between 6th and 8th centuries.
Medieval Muslim-Christian relations have been heavily debated within historical research, but have generally occupied themselves with the study of propagandistic literature and Crusader accounts that give an inaccurate and obviously biased opinion of Islam. In my research I do not only propose the use of pilgrim accounts as a new resource for historical studies, I also employ social network analysis as a method in order to compare the expressions of pilgrims Symon Semeonis and Felix Faber on Islam to the general notion of Islam in the time they wrote their travel accounts. Additionally, by studying the actual social interaction between pilgrims and muslims as described by both pilgrims, I have discovered what appears to be a distinction between what pilgrims reported to their readership and what they thought about 'the other'. 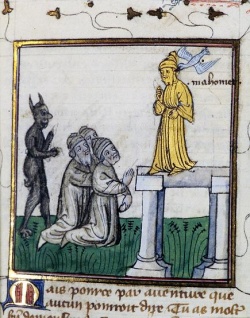 Depiction of Muhammad preaching to his followers.
Starting from the seventh century A.D., the Christian world was confronted with the rise of Islam as not only a religious force, but also as a strategically proficient force that conquered great parts of the Mediterranean including Jerusalem. Attempts to reconquer the Holy Land, such as the First Crusade (1095-1099) were accompanied by propagandistic literature in order to incite as many Christians as possible to take up arms. In turn, a lot of historical studies have focused on these accounts in order to reconstruct medieval conceptions of Muslim culture and religion, through which it comes as no surprise that such studies have generally resulted in negative and ignorant medieval conceptions of Islamic culture. Modern research points out that there is another kind of source that also gained in popularity around the time of the First Crusade and has been overlooked by historical studies despite their usability: the pilgrim account (Schroder, p. 27). So, what do these pilgrim accounts tell us about medieval perceptions of Islam?

In order to tackle this problem, I have selected two pilgrim accounts that feature detailed narratives on Muslims and their religion. The first of these is the Itinerary written by Symon Semeonis, an Irish friar who traveled to the Holy Land in 1322/3. Unfortunately, because half of his tale has been lost over time, we do not know much about him. However, more can be said about Felix Faber, whose Wanderings I have chosen as the second source because of his elaborate written recordings - in an English edition his work counts roughly 1200 pages. Felix (1441-1502) lived in Ulm, Germany, and in 1483 started his second pilgrimage. His first pilgrimage had been too brief for his likings; in fact he could not find inspiration to write much about it. Therefore, when he left on his second pilgrimage, he promised his brothers that he would write an extensive account so that they may experience the travels by reading his story.

By studying these sources from a social network perspective, I uncovered two different kinds of networks. First of all, these medieval pilgrim accounts seem to have been involved in a larger network that spread information about Islam. More importantly, about a century before Symon's pilgrimage this network, which originally was intended to portray Islam as negatively as possible, started to develop a new branch that focused on gathering accurate information about Islam. Where Muslims were first portrayed as false idolaters, believing in three foul gods, from the twelfth century onwards this new current started to spread the actual beliefs of Muslims. Judging by the degree in which both pilgrims elaborate about Muslims and their customs, we can place them somewhere in the middle of this network. For example, Symon offers a somewhat accurate account on the ramadan: “they fast the whole day until they see the first star, and then they eat and drink” (Itinerarium, p. 51), though he is not too positive about their mosques: “they call their churches or oratories keyentes, which are not churches, but synagogues of Satan” (Itinerarium, p. 51). While this does not seem to distinguish pilgrims all that much from anti-Islam literature, such utterances prove to be only one side of the story. 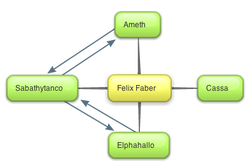 figure 1- Felix Faber's social network
In order to discover the other side of the story, social networks within the accounts had to be studied. As it actually turns out, pilgrim accounts contain descriptions of their social networks in which they engage in personal interaction with Muslims. Furthermore, these acccounts exist alongside the aforementioned descriptions and therefore suggest that they were complying with the tradition of the network although their own views were not nearly as negative.

By means of an example, let us focus on one part of the social network of intercultural interaction that I have retrieved from Felix Faber's account (figure 1).

Throughout his journey, Felix has made 'friends' with three Saracens, Sabathytanco, Elphahallo, Cassa, and Ameth. Although he values all of them in a rather positive way, his description of Ameth is exceptional. Ameth, an ass-rider, rushes to Felix's aid after the latter has fallen off his ass:

“When Ameth, our guide, saw this, he jumped off his own horse, picked me up from where I lay, stroked my limbs (…). Indeed, this heathen Gentile Moor showed me as much kindness in my trouble as the most tender-hearted Christian could have done.” (Faber, Wandering book II, p. 190-1)

What we can see in Felix's description is a remarkably positive appreciation of his saviour. Although Felix is aware of the fact that according to Christian norms Ameth is a 'heathen Moor', he relates him to familiar Christian values such as charity. This hints at the suggestion that Saracens and Christians are more alike than generally thought (Schröder, 274).

So, although pilgrim accounts initially give the impression that they fit into the literary tradition of their age by providing descriptions about Islam, contrasting personal descriptions of social interaction prove that the traditional image of a solely hateful relationship between Christians and Muslims cannot be upheld. As my social network analysis of pilgrim accounts has shown, there is more to medieval Christian attitudes towards Muslims than meets the eye.