The Holy Grail and other relics in the Middle Ages:
a research about representation 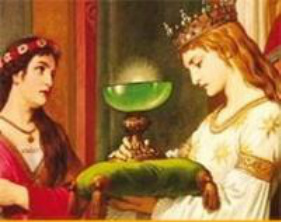 The myths and legends about the Holy Grail are nowadays as much as powerful as thousands of years ago, when the first stories occurred. In the course of time, the Holy Grail has changed of appearance and also his meaning has been interpreted in different manners. It is suggested that the Grail could have been a box, a plate, a chalice, a cauldron or even the philosopher’s stone which would bring immortality. Or was it a more abstract mystery, like the secret bloodline of kings which can be dated back to Jesus Christ himself or a synonym for the generosity of nature? In this research three primary sources will be discussed with two questions in mind: In which way the Holy Grail has been represented in those sources and what does the corresponding developpement looks like? Are there also networks implicated?

The networks which are implicated in this research are multiple. By creating an interrelation between the concept of the Holy Grail, the three primary sources and the representation of it in those sources, we could recognize first of all a network of time wherein the Grail evolves with time. Secondly, there is a topographical network which goes from the East to the West, respectively from the Holy Land to Europe. This network has to do with the lore of Arculf’s experiences and his contact with the relics which he discovered and with the work of Adamnan scattered all over Europe. Also the literary transport of the Holy Grail, from the place where Jesus was crucified to the kingdom of Arthur, creates a network between East and West. Finally, there is an overall Christian network which brings the three primary sources together.

Sources of the images