On the 25th of April, in the year of our lord 1483, Bernhard von Breydenbach commenced his journey to the Holy Land. He took with him a skilled drawer and painter named Erhard Reuwich, who was to record parts of their journey in images. They traveled to the holy land in the company of highborn lords, and partly in the company of that well known pilgrim, Felix Fabri. Like Fabri, Bernhard wrote a book about his travels. His is the first of such pilgrim accounts to have been illustrated with drawings made en route. Despite of the extraordinary character of the book, it has received little attention from historical research. Here follows a short synopsis of Breydenbachs book and journey, and a comparison with contemporary pilgrimages.

Born around 1400, Bernhard was the son of Gerlach der Jungere von Breidenbach, a member of the old and noble family of Breidenbach-von-Buresheim and countess Lysa von Wied-Isenburg. In 1450 he was appointed canon to the cathedral of Mainz en six years later he enrolled at the university of Erfurt where he graduated as a canonical lawyer. He fulfilled various positions at the Mainz diocese until he was made deacon of the cathedral in 1484.Bernhard died on the 5th of May 1497 and was buried inside the Mainz cathedral,where his epitaph can still be seen. His pilgrimage to the Holy Land lasted from the 25th of April 1483 until the 2nd of February 1484.om te bewerken. 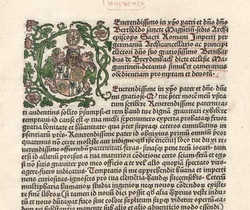 The first edition of Breydenbachs pilgrim account was written in Latin and published in 1486 by Erhard Reuwich, who was not only a drawer and a painter but also a printer, under the title of Peregrinatio in Terram Sanctam. The book contains 157 folios and 19 woodcuts by Reuwich. In the same year the second edition was printed, this time in German and entitled Die Reise ins Heilige Land. A third edition, a Flemish translation, was also printed by Reuwich. All these editions are decorated with the original woodcuts by Erhard Reuwich. But when Reuwich stopped printing, the book didn't stop being published. Between 1488 and 1523 nine more editions were published in various languages and decorated with Reuwichs prints. Evidently the book was quite popular, probably thanks to the woodcuts which distinguished the book from other pilgrim accounts. 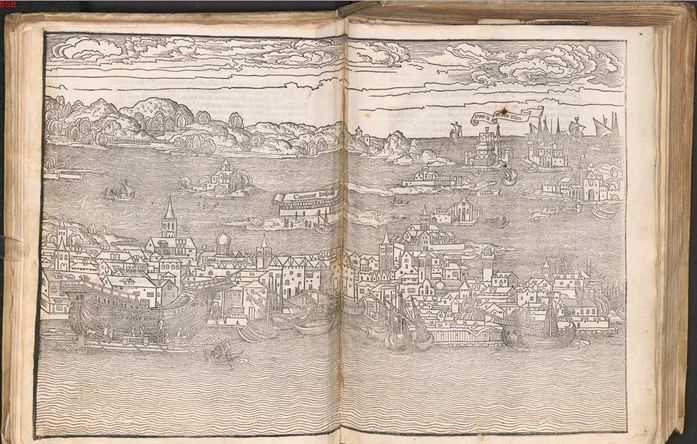 Woodcut of Venice
Bernhard started out from Germany with a small group of companions who he met in Oppenheim. From there he traveled with the Count Hans von Solms and lord Philipp von Bicken and their servants to Venice. There they stayed at the in of another German, Peter Ugelheimer from Frankfurt. He was the one who put Breydenbach and his company in contact with one of the shipowners who sailed to the Holy Land, Agostino Contarini. Ugelheimer assisted the pilgrims further by acting as a mediator between them and the ships captain when they established the contract for the journey. This was a common practice.

Venice was by far the most important gateway to the east. The city had traded with the east up from the 8th century and roughly two centuries later many islands and cities on the route to the east belonged to Venetian territory. When the number of pilgrims wanting to travel to the Holy Land increased, it was easy enough for the Venetian merchants to substitute (part of) their usual merchandise for the transport of pilgrims. Everything related to this tourism business was strictly regulated by the Venetian government. The city laid down rules regarding to the housing of pilgrims, the appearance of the ships carrying pilgrims, the cost of the journey and what was to be expected from the ships captains. The city even created a tourist office, where pilgrims could get assistance in finding housing, finding a ship and drawing up the contract with the ships captain.

Breydenbach had no need of this tourist office since he had his own contact, from the same home country, who assisted him in exactly these matters. In all further matters regarding the journey Breydenbach seems to have followed standard practices. He included the contract between himself and the captain in his book. Apart from some minor details this contract matches others from the same period perfectly. For example the captain was expected to feed the pilgrims twice a day, except when in port, and the captain was expected to escort the pilgrims in the Holy Land. There was a stipulation in the contracts about a possible continuation of the journey from Jerusalem to Mount Sinai. When the pilgrims chose to make this journey the captain was obligated to refund them part of the travel fee they paid. Breydenbach made use of this clause since he traveled to Mount Sinai and the monastery of st. Katherine’s. These are all just details of Breydenbachs journey, but all considered he seems to have booked a typical pilgrims package deal for his travel to the Holy Land. 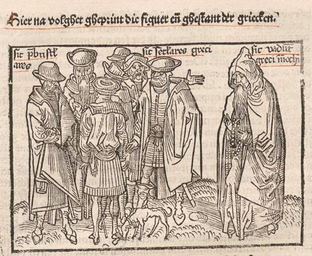 Woodcut showing Greek men
But if Breydenbachs story isn't exactly an extraordinary one, why was his book so immensely popular? The answer to this question must lie in the beautiful illustrations that accompanied the text. As mentioned this was the first pilgrim account to be illustrated with pictures drawn en route. The illustrations show many detailed cityscapes, from Venice, Rhodes, Cyprus, Jerusalem and more. Smaller images of strange animals, plants and alphabets are found throughout the book. The foreign people were also recorded. The book contains images of Jews, Greeks, Syrians, Indians, Arabs and Turks in their specific regional attires. These exotic images of the strange and unknown east must have attracted many a reader to the book, and are still of great interest, since they show us something of how things foreign were perceived at the end of the middle ages.