Knightly pilgrimages to Rome and the Holy Land

In the year 1450, which was called a Jubilee Year by pope Nicolas V, many people went to Rome to receive ‘groote paroene’, or full indulgence. Among them was John I, Duke of Cleve and Mark, who together with several nobles in his train, travelled to Rome and also visited the Holy Land. In the same year, his brother-in-law, Arnold of Egmont, duke and count of nearby Guelders and Zutphen, made the same journey, during which the companionships met in Rome.

In my research I investigate the social and religious networks of the nobles in the Low Countries at the end of the middle ages during their pilgrimage to Rome and the Holy land. The pilgrimage of the counts, mentioned above will be the subject of my case study.

This manuscript is somewhat problematic, because it is not a common travel account and which was from the very beginning meant for a nunnery, which is not more fully specified.
Researches see this travel account as a means for the sisters, who could not actuality go the Holy Land themselves, to make a kind of virtual pilgrimage. The point of discussion is whether the description of this trip is  authentic (according to Nijsten), or whether it is  a  copy of another handwriting (as suggested by Rudy). Rudy didn’t actually research it and in my paper I  try to prove that in fact it is a copy.

For both dukes it was evident  that one couldn’t simply start travelling all of a sudden. They both experienced a tumultuous period of upheaval  and warfare. Johan I was ‘sonder enige veeden avan ymants anderswegens in guedens vreeden and rust’ after a war with the archbishop of Cologne and Arnold of Egmont’s trip was also inspired to  ease the tension and the grieves of the subjects against their lord.

Both man left theie dukedom in the hand of family members. Arnold van Egmont had his wife Catherina van Cleve (famous of the Book of Prayer) oversee it, being assisted by the Counsel of Sixteen.  Johan I visited the city of Brussels, by the start of his journey, where his ‘lieven Oemen’, Phillips of Burgundy, lived. It is known that Phillips supported both dukes and had great political influence in the nearby regions.
During the pilgrimages there was some contact with the homefront. Diverse sources informer that the cities of Gueldern sent messengers to Italy to inform after their lord, during his travels. 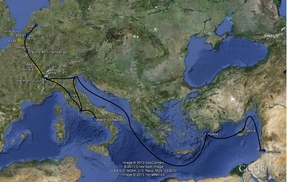 [3] Route to Rome and the Holy Land
The chronicle also gives information about the route that was takien to the Holy Land. Looking at the cities that are named in the chronicle, Duke John I possibly used a route Via Francigena, the old pilgrims’ route from Canterbury to Rome. He made this trip with his fellowship on horseback. As so many pilgrimsges he took a ship in Venice to sail to Jaffa. From Jaffa the company traveled on donkeys to Jerusalem. In contrast to the comprehensive tradition in the handwriting, the court chronicler used six lines to discuss the visit of the holy places of Jerusalem. In all probability one was guided around by the monks of the monastery of Zion. 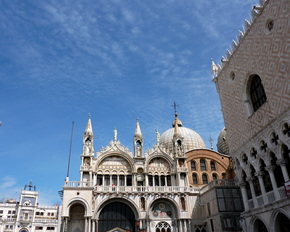 [4] Venice - Basilica di San Marco and Palazzo Ducale
The chronicle describes in pretty much detail who was included in the company of the Duke. It is striking that some noblemen from the company of the Duke of Cleve were subjects of the Duke of Gelre.  There was for example Dirck Batenburg, bannerheer and advisor of Arnold of Egmont. The following persons, all being lower or no noblemen, also travelled with the Duke: a chaplain, a room servant, a cook, a drum player, a barber, and three servants to work at the court. This was a rather small company, compared to the large number of people that normally speaking accompanied the duke  (minimally 200 persons).

Contacts with Muslims and Jews

The connections of Arnold of Egmont and ‘the common sisters’ are not totally odd. At the court of Gelre were many clergymen; the chaplain, worked as a secretary and spiritual overseer.  The court of Gealdern had links with diverse monasteries and churches in its neighbourhood where several manuscripts were written and decorated for the court.