Those who have travelled should be familiar with – at least – two lessons: the importance of preparation and the occurrence of unexpected changes. I am quite sure that pilgrims have learned these lessons as well. The journeys they undertook covered astronomical travel distances, strange cultures and distant countries. How did pilgrims manage to reach their goals? Pilgrim reports offer an interesting perspective on the journeys. Research has focused mainly on the spiritual character of pilgrimage. But which practical aspects of pilgrimage can be read in the reports? Due to limited space, I will focus on practical aspects in ‘The Book of Margery Kempe’ and ‘Tvoyage Mher Joos van Ghistele’. The latter’s report was written by Ambrosius Zeebout. Two other cases will have my attention: the travel conditions on the road and on water, and possible differences between male and female pilgrim’s travel experiences.

A pilgrim’s journey was preceded by settling a few cases. The pilgrim had to pay off any debts, and pending lawsuits should be finished. Margery Kempe, a woman who undertook a pilgrim’s journey to Rome and Jerusalem in the early fifteenth century, asked her parish priest to call upon anyone who had lent money to Margery. The bishop had to grant permission for the journey, as well as Margery’s husband. Pilgrims received a letter of recommendation, which can be seen as a ‘pilgrim’s passport’. The document identified a pilgrim, and it gave access to privileges (food, shelter) on the road. A last ceremony – the ordo ad servitium peregrinorum ­– was the blessing of the pilgrim and his or her entire equipment, which was quite light. A staff, a cloak, a hat with a scallop (to which a saving and healing power was attributed) and a small leather bag.

Medieval roads were bumpy and in a bad condition. Regular maintenance was only taken care of since the eighteenth century. Rivers had to be crossed on foot, which was very dangerous. Bridges were expensive and thus rare. Actually, the entire pilgrim’s journey was done on foot. Due to financial reasons, but spiritual reasons as well. Travelling over water was relatively comfortable, but terrible conditions on board wiped out the comfort. The small and stuffy ship cabins offered good conditions for the spread of diseases or – if pilgrims were lucky – bad smells. Food on board of the ships was disgusting. After a few days of travelling, meat was infested with maggots, rats urinated on the ship’s biscuit and water released a green, frothy substance.

Which practical problems did the pilgrim face? On the road, robbers and bandits could pose a threat to pilgrims. But two very basic problems were more important than that: food and shelter. The latter was provided on a daily basis by xenodochia, churches and monasteries. Giving aid to a pilgrim was regarded as a good deed. Shelter mostly came with food, but the food’s quality varied. Sometimes pilgrims could eat meat, fish or vegetables, but that was not the standard diet. Other practical problems were related to the weather conditions in the visited countries. Heat and drought were not regular for North-European pilgrims. 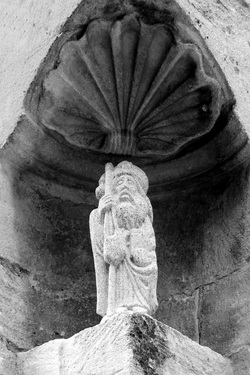 Pilgrims could use more or less ‘standard’ routes. Known paths
offered relative safety, clear directions and, especially from the late middle  ages, daily shelter. Could the pilgrim’s routes altogether be typified as a network? I think they can. Following Irad Malkin’s network theory, a pilgrim’s  network was a ‘decentralized network’. Three large centers – Santiago, Rome and
Jerusalem – were connected, but they also had their own network surrounding  them. The peripheral nodes of the entire network, e.g. Jericho and Burgos, were not connected, ruling out the option of a fully connected network. The nodes were the sacred places pilgrims could visit (for example Vézelay or Cluny), but also the smaller places that provided food and shelter. I think a pilgrim’s
network did exist. However, the network coincided with trade networks. In Joos van Ghistele’s pilgrim’s report from the late fifteenth century, pilgrims are advised to ask letters of recommendation from traders. In this way, pilgrims  used the social network of traders in order to travel from place to
place. Overall, the pilgrims were a recognizable group with a specific goal. A medieval convoi exceptionnel.
The statue on the left photo marks the Southern-French village, close to Avignon and the Mont Ventoux, as a pilgrim's node. The twelfth-century romanesque church was a pilgrim stop between Arles and Santiago. 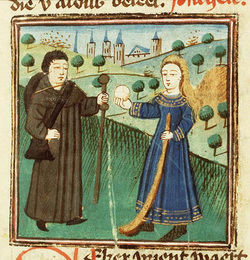 From the fourth century, female pilgrims were frowned upon. A pilgrim’s journey did not match the caregiving role medieval society attributed to women. Physical prejudices also blocked acceptance of female pilgrimage. But it did happen that women undertook the journey. Travelling in groups was the safest way  to go, but in those women often were a minority. They were tolerated, but only if they were quiet and modest. On the other hand, Felix Fabri, a fifteenth-century German friar and pilgrim, praised women for their modesty and devout way of bathing in the river Jordan.

Hopper, Sarah. To be a pilgrim: The medieval pilgrim experience. Phoenix: Sutton Publishing,  2002.

Craig, Leigh Ann. “’Stronger than men and braver than knights’: women and the pilgrimages to Jerusalem and
Rome in the late middle ages.” Journal of Medieval History 29 (2003): 153-175.

Images:
The banner: ‘A Brief History of Ships and Sailing 2/3: The Dark and Middle Ages’, via
http://www.thedearsurprise.com/?p=1673.

Second image from my own collection.