In Medieval times a lot of people undertook a pilgrimage to the Holy Land. But someone who went on a pilgrimage was, during this pilgrimage, no longer a part of normal society. Yet there was still interaction between the society and pilgrims. There were networks of people who enabled the journey of the pilgrims. I examined the networks a pilgrim used during his journey.  For this research I chose a pilgrim account written by Felix Fabri about his pilgrimages in the years 1480 and 1483. This research fits within the rising paradigm within the study of history, the Network-theory.

Felix Fabri and his desire to travel

Felix Fabri was a Dominican monk who lived from 1437/8 until 1502 in Germany. He undertook two pilgrimages, one in 1480, the other in 1483. The reason he undertook the second pilgrimage, was one of dissatisfaction with his first journey. He wanted to see more of the Holy Land and stay longer. He therefore undertook a second journey, which wasn’t usual. This is seen in the way he gained permission to leave his convent. On his first journey he asks permission from his abbot, who helps him gain permission from Pope Sixtus IV and Leonard de Mansuetis van Perusium, the Dominican order leader. A monk always needed permission from these persons, before he was allowed to undertake a pilgrimage. The abbot also granted Felix enough funds for his journey. When Felix wanted to go on his second journey, he prepared with more secrecy. He got the permission from the Pope and the order leader via third persons. He presented them to the abbot when a nobleman called John the Truchsess wanted to take Felix with him on pilgrimage, thereby forcing permission from his abbot. This time the funds came from the nobleman. In these preparations we already see some networks a pilgrim used for his pilgrimage. 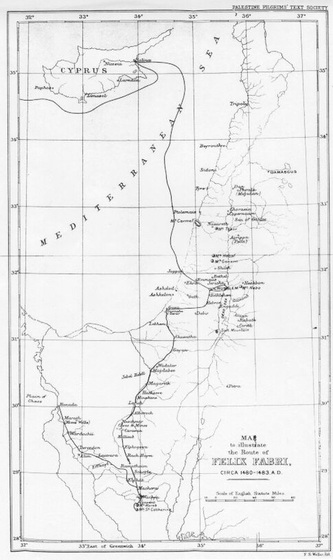 The first part from his convent to the Alps Felix travelled with a servant from a nobleman he helped. This was because of the danger of robberies and accidents on the road. From the Alps to Venice he travelled with three noblemen and there servants, who would travel with him for a large part of his pilgrimage. Once in Venice, John the Truchsess joined them. The noblemen went to the Doge of Venice to get his protection and the protection of the governors of different islands in the Mediterranean Sea. They used a special letter from Sigismund, Archduke of Austria, for this. The Senate in Venice had decided to build special houses for noble pilgrims, so they wouldn’t have to stay in local inns. The Senate also selected two captains, Peter de Landro and Augustine Contarini, who would take the pilgrims to the Holy Land.  On these ships there were pilgrims from all over Europe. “There were many Latin priests, Sclavonians, Italians, Lombards, Gauls, Franks, Germans, Englishmen, Irishmen, Hungarians, Scots, Dacians, Bohemians, and Spaniards”

When the pilgrims arrived in the Holy Land, they first had to ask permission from the governors of Jerusalem, Ramatha and Gazara. They also notified the Father Guardian of the Mount Sion. This man was leader of the Minorite brothers, a order dedicated to guiding pilgrims on their pilgrimage in the Holy Land. They also look after the holy places and churches. The brothers are funded by donations from the pilgrims and nobles in Europe, like Philip of Burgundy.  John of Prussia, the procurator of the order, is a very important figure for the restoration of holy places. He has contacts with the governor of Jerusalem and its military leaders. He also keeps contact with the Mamluk sultan. This sultan would allow restoration of churches if the Minorite order would pay him. The local people, however, would usually destroy the church anyway.  The Saracens were relatively tolerant to the Christians, allowing them entry for their pilgrimages.  However the pilgrims usually had to pay many fees to enter holy places. The local population also plagued the pilgrims, hoping to get a compensation for violence used against them, if one of the pilgrims lost his control. The Saracens are an example of a network which enabled the pilgrims to go on pilgrimage, but also made it harder for them.

When Felix and the pilgrims reach the Holy Sepulchre, we see there are seven different Christian fractions present in the Church. These include the Latin Catholics, the Greek orthodox, the Nubian, Armenian, Indian and Syrian Christian and the Jacobites. All these got a section in the church by buying it from the Sultan. The second time the pilgrims came to the Holy Sepulchre a special ceremony was held, knighting the pilgrims of noble heritage. This was done by John of Prussia, who got special permission of the Pope, the Emperor of the Holy Roman Empire and kings throughout the entire Christian world. These knights entered the Order of the Holy Sepulchre. This order was created during the First Crusade in 1099 and has survived until this day. During the Middle Ages it’s main goal was protecting the Christians and the Christian world from the infidels and heretics.
Unfortunately this is where I ended my research, because although Felix has delivered us a very detailed report of his pilgrimage, it is also very long. This part covered just the first three months of his twelve month pilgrimage, which also included a pilgrimage to the Mount Sinaï. Unfortunately, due to time and word limits I had to stop my research here.

Amouroux, M.: Colonization and the creation of hospitals: The eastern extension of western hospitality in the eleventh and twelfth centuries, Mediterranean Historical Review, 14:1, 31-43

Stewart, A., The Book of the Wanderings of Brother Felix Fabri, Londen: Paleestine Pilgrims’ Text Society, 1892)